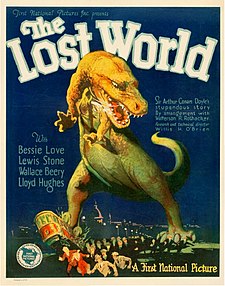 Film poster created in 1924 for the 1925 release of the movie. Image is from Wikipedia. Rights are in Public Domain.

When much of the world was caught up in the 2013 Olympics, a friend sent me some links to articles about Olympics history since its revival in Athens in 1896, which had only 143 competitors from 12 countries. One of the Americans was a track-and-fielder from Boston named Bill Hoyt. Hoyt is a family name with deep roots in the Connecticut River Valley of western Massachusetts. Edward Hitchcock, the 19th-century geologist and first scientific interpreter of dinosaur tracks, was a Hoyt on his mother’s side. His “Uncle Ep” (Epaphras Hoyt) encouraged young Edward’s scientific interests in natural history and astronomy.

Checking through a Hoyt genealogy, I couldn’t connect Bill to any of the Deerfield Hoyts, but a Charles Arthur Hoyt was working as a chemist and mining engineer in Georgetown, Colorado, in 1870. Whoa, that’s interesting, I thought, because George Everett Marsh, son of dinosaur track discoverer Dexter Marsh, was working as a surveyor and mining engineer in Georgetown at that same time. A little more poking around showed that Charles’s father was Arthur Wellesley Hoyt, son of Epaphras, thus a first cousin to Edward Hitchcock. Georgetown was barely scraping out its place in the Rocky Mountains and Colorado wasn’t yet a state, but two descendants related to the discovery of dinosaur footprints in the Connecticut River Valley were living there in the 1870s.

Publicity still for actor Arthur Hoyt, great-grandson of Epaphras Hoyt of Deerfield, Massachusetts, uncle of Edward Hitchcock, who made the first substantial studies of “fossil bird tracks,” a.k.a. dinosaur footprints. Image from Wikipedia.

Charles Hoyt married Josephine Briggs and they had two sons, Arthur, born in Georgetown in 1874, and Harry, born in Minneapolis in 1885. If you have ever watched old Hollywood movies, you have probably seen Arthur Hoyt a zillion times. Starting in silents and continuing into talkies, he eventually carved out a niche for himself playing the milquetoast, the hen-pecked husband, the fusspot banker, the Nervous Nellie. I recognized him the moment I saw his photo. He made over 275 movies and worked regularly with a lot of big names: directors Preston Sturges and Frank Capra, actors Henry Fonda, Spencer Tracy, William Demarest, Clark Gable, Barbara Stanwyck, Eddie Bracken, Charles Coburn, Joel McCrae, Claudette Colbert, Mary Astor, Rudy Vallee, even early Gloria Swanson, Fanny Brice, Rudolph Valentino—the list goes on and on. That is the company kept by the great-grandson of General Epaphras Hoyt, military historian, major-general in the Massachusetts militia, staunch citizen and proud descendant of the Puritan founders of Deerfield, Massachusetts. It’s anybody’s guess whether Epaphras would have been pleased or appalled by his great-grandson’s life.

Arthur Hoyt as Professor Summerlee in the 1925 movie, “The Lost World,” based on the story of the same name by Arthur Conan Doyle.

Harry, Arthur’s younger brother, was in the movies, too, mostly as a director. Arthur appeared in at least one of Harry’s productions, which happens to have been the first film version of Arthur Conan Doyle’s dinosaur story, The Lost World. Wow. The film is dated 1925, thus only 13 years after Doyle’s story was serialized in The Strand Magazine before being published as a book. It starred Wallace Beery as Professor Challenger and Bessie Love as Paula White, the love interest of Edward Malone. Arthur played Professor Summerlee, a scientist. Here it is: a family’s fascination with paleontology tumbles down the generations, first as science, then as art—and even in art, it’s in the role of a scientist.

The story takes place on a vast mesa deep in the jungle of South America, about as exotic a setting as a Brit such as Doyle could imagine, so distant in space, time, and familiarity that it could seem feasible that dinosaurs would still live there (with cavemen, no less), beyond the reach of the modern world—until the story begins. Apparently, Doyle based the site on the reports of a friend, Percy Fawcett, who went on expeditions to Bolivia. Wikipedia notes that the region had “monstrous tracks of unknown origin,” a pretty apt description of the reactions of Dexter Marsh, James Deane, Edward Hitchcock, and others who first gaped at the “fossil bird tracks” in the sandstone of western Massachusetts.

The classic battle between a ceratopsian and a therapod in a still from Hoyt’s “The Lost World.” Figures are by Willis O’Brien.

Directorial credit is generally given to Harry Hoyt and Willis O’Brien, sometimes, curiously, to only one or the other without explanation. It appears that Hoyt was the director and O’Brien was responsible for the special effects, which he further developed a few years later in King Kong and the long career that followed. It is well worth a few minutes to take a look at the film clips on O’Brien’s Wikipedia page. In 1916, he was already making animated dinosaurs, only two years after the first animated dinosaur movie, Windsor McCay’s Gertie the Dinosaur (1914). While Gertie is clever, O’Brien’s The Dinosaur and the Missing Link: A Prehistoric Tragedy is a lot funnier, the special effects are a riot, and the quail looks pretty much like a therapod. The Ghost of Slumber Mountain (1918) is also there and you’ll find a clip from The Lost World as well. I wonder if Slumber Mountain is the first filmed depiction of a battle between a ceratopsian and a tyrannosaur. It is apparently the first to use live and animated figures together. The smoothness of the animation surprised me, given the jerky motions of humans in films of the era. The creatures were made of armatures coated in rubber skins, with air bladders inside that gave the illusion of breathing. The effect is wonderful. The legacy of the “bird tracks” lives on, too: the narration mentions, in a way that now sounds quaint, “prehistoric birds and reptiles.”

Arthur and Harry Hoyt likely heard from their father about his father’s cousin Edward, who wrote the first significant paper on the subject of dinosaur footprints. One of the last things Edward Hitchcock did before he died, in February 1864, was to inscribe a copy of his major opus on ichnology for his cousin Arthur. Perhaps, when they heard about the bones in the Morrison Formation, only 35 miles from Georgetown—which they certainly would have, as the so-called Bone Wars between Othniel Charles Marsh (no relation to Dexter and George) and Edward Drinker Cope became very big news—Arthur and Harry Hoyt thought of Edward’s description of the humongous birds we call dinosaurs. In any case, they certainly were among the first generations of (mostly) boys who grew up dreaming of strange worlds teeming with gigantic reptilian beasts battling for survival.

From the time of the first scientific discovery of the footprints in 1835 to the first movie animations in 1914 was nearly 80 years. That the story can be traced through one family is remarkable.